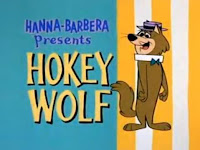 “When did Hokey Wolf debut?”

It’s such a simple question, you’d think there would be a simple answer. Ah, but the pesky internet gets in the way.

It seems even news agencies rush to Wikipedia for a quick-and-dirty way to get information when they need it, say when a star dies. And there’s no doubt that people who have knowledge of arcane subjects have gone there to enumerate the definitive story on them where none seems to exist elsewhere. But the problem is, of course, anyone can post anything there, with not so much as a footnote to reveal if the information came from a respected journal or as a joke developed after a night of too many Mai-Tais.

And so, let’s toddle off to Wiki-land to get an answer to our question about Phil Silvers in wolf’s clothing.

Wiki has a painstakingly-prepared episode list for the Huck and Yogi shows by someone who must have some knowledge of the subject. It starts:

Hokey Wolf is a Hanna-Barbera cartoon that appeared on The Huckleberry Hound Show in 1960, filling the slot left by Yogi Bear.

And it goes on to reveal the first Hokey episode, “Tricks and Treats,” debuted on September 11, 1960.

The source is apparently The Big Cartoon Database, which is also assembled by well-meaning and presumably well-informed fans.

There’s just one problem. Yogi Bear was still on the Huck show until he got his own show. In 1961. Hokey Wolf was still on someone’s storyboard in 1960.

This brings us to a little newspaper column from the Newspaper Enterprise Association, a venerable syndication service. If you’re not interested in Hokey Wolf, and as a character he doesn’t do a lot for me, you may be interested in reading how getting laid off at MGM was the best thing that ever happened to Joe and Bill’s accountants. This is a portion of an un-bylined article dated Jan. 31, 1961:

Hanna Tops Disney
NEW YORK (NEA) Joe Barbera, the second half of the Hanna-Barbera combine which produces the Flintstones, Quick-Draw McGraw, Huckleberry Hound, etc., has uncovered a gold mine. . .he says he and his partner will do a $7 million film business this year. . . “But that doesn't count merchandising—toys and things—and that should do better than $20 million. And that's wholesale.”
Barbera says there now are more than 87 items bearing the names of the various H-B characters. . .everything from bath salts to rugs. . . “We are now outselling Disney, is his prime, by four to one.”
And there probably will be a better year ahead. . .Barbera says they’ve decided to give Yogi Bear, one the characters on the Huckleberry Hound show, his own program. . .this will introduce new characters, so pretty soon you'll be meeting such actors as Hokey Wolf and Dingaling (two wolves), Snagglepuss (a mountain lion) and Yakky Doodle (a duck).
The thing keeps mushrooming . . .Barbera revealed plans for a Yogi Bear feature film. . . and an amusement park, a la Disneyland and Freedomland, named after Yogi's haunt, Jelleystone [sic] National Park. . .this will probably be built near Phoenix, Ariz.
The H-B studio can turn out so many products (five new half-hours a week) because “the old cartooning style is out.” . . . “It isn’t necessary to have thousands of drawings, with flowers and leaves rustling in the breeze. The story and character are the things we concentrate on.”

So let us leave Joe to count his money and Disney to create tween musical comedies and return to Mr. Wolf. If he hadn’t aired by the time this article made it into print, just when did he first appear on the screen?

Granted, dates in syndication back then might vary by a few days, but the L.A. Times of March 14, 1961 states:

Huckleberry Hound, KTTV. (11), 7 p.m.. Professor Huck is called upon by the nation’s leaders to save mankind from an Idaho potato which has not only eyes, but a brain as well. This show also brings the debut of a new personality, Hokey Wolf, and his little pal, Ding A Ling.

A very unscientific check of newspapers on the net can find Hokey was spotted on channels in several cities but none before the story mentioned above. In fact, the previous week’s Times lists Bare Face Bear with Yogi as being on the Huck show on March 7th. So, Yowp-pedia™ will bow to the Times and declare Hokey first appeared on the week starting Monday, March 13, 1961.

For the record, the Times occasionally lists plots of a few other episodes (generally, it only gave a plot for the Huck segment):

Of course, judging by the NEA column, the real question should be “Where can I get some of those Hokey Wolf bath salts?”
Yowp at 10:11
Share