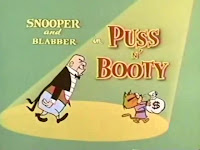 When Hanna and Barbera were asked to create another half-hour cartoon show following the success of Huckleberry Hound, they decided to spoof the three most popular genres on TV at the time—westerns, crime shows and clueless dad/smart kid sitcoms. And that’s how Quick Draw McGraw, Snooper and Blabber and Augie Doggie came into being.

Quick Draw is my favourite of all the Hanna-Barbera half-hour packages. The parody isn’t hard-hitting, even by 1959 standards, but it’s still fun. The characters are funny-stupid, not annoying-stupid. Daws Butler’s voices are stellar and he finds wonderful ways to comically butcher words. The stories are well-constructed and Mike Maltese comes up with enough odd and silly phrases to at least create a smile.

Puss N’ Booty is the first Snooper and Blabber. Snooper’s voice is Daws Butler’s take on Archie, the bartender on Duffy’s Tavern played by the show’s creator, Ed Gardner; its previous cartoon owner was Ziggy the Crow in the Huck series. Blab’s full name is Blabber Mouse, but he doesn’t really blabber during the whole run of the show, so it must merely be a pun. His sibilant voice was provided in the first four cartoons by radio afternoon host Elliot Field before Butler took it over.

The voice isn’t the only thing different here. H-B now had two series going, so they added to their staff. That included Maltese, who came over with Warren Foster from Warners to replace Charlie Shows. Even the music was different. While the Capitol Hi-Q and Langlois Filmusic (Jack Shaindlin) libraries were still providing the background cues, the new series generally avoided the composers used in the Huck show and larded up with material by the prolific English composer Phil Green. And the sound cutter used cues from the Hi-Q “S” (for ‘short’) series, so the music changes far more often.

Not all the familiar Snooper and Blabber elements are in place in this cartoon, such as a number of catch-phrases like “Stop in the name of the Private Eye (fill in the blank)!” And Snooper plays it fairly straight. Maltese decided to open Puss N’ Booty with a Dragnet-style narration and Butler’s voice is suitably monotone. That concept lasted one cartoon. 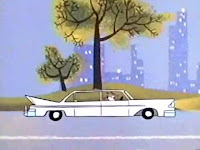 The cartoon opens with one of those great, long, late-‘50s fin-tailed cars racing down a city street. “My name’s Snooper. I’m a private eye. Cat-eye, that is.” After the necessary introduction, Snooper begins to tell the story of how they were staked out one night by the bridge waiting for a suspect, as the camera pans to the pair reading a newspaper.

Snooper sees by the Daily Bugle that a fortune was left to pet cat Aloysius and nothing to the Butler. Suddenly, the conversation is interrupted by sound of a black, late-‘50s fin-tailed car stopping on a bridge and tossing a package into the river. The two private eyes pull the sack from the water and out pops Aloysius. 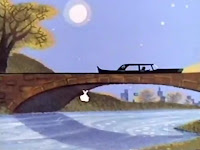 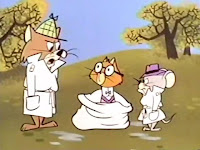 Being a parody, Maltese sticks with the format of a detective film, which dictates we now flashback as the victim relates his tale of woe, which begins at the reading of the will.

Aloyius gets 100 acres of downtown Dallas and three golf clubs. Hives gets nothing. The viewer gets reaction shots of the butler with more action than the entire Touché Turtle series a couple of years later. I like Maltese’s variation on a Tex Avery’s jaw-drop take. Instead of the jaw, the huge teeth fall out, squash and stretch, and bounce back into Hives’ mouth. 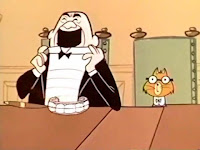 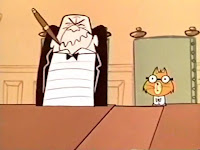 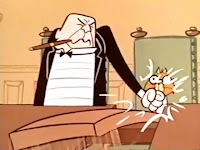 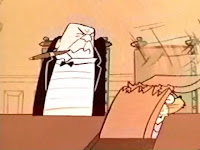 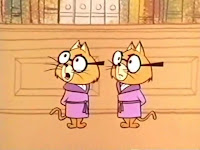 The thick plottens (oh, sorry, Snooper used that one on a later cartoon) as we flash to a week later when Aloysius comes face-to-face with a phoney version of himself. That’s when Hives stuffs him into the bag and we arrive back at the present. 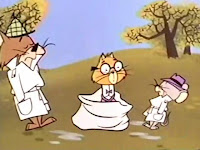 Snooper suggests the services of a professional snooper (“And Blabbermouse,” helpfully adds Blab) and Aloysius offers to pay $150,000. Apparently, our heroes aren’t used to anyone paying the “usual, small, exorbitant fee” because they faint.

It doesn’t take much of a private eye (which is fortunate, because Snooper isn’t much of one), to look through the window and see that Hives has enlisted his crony Crumpet to pretend to be Aloysius to collect a $1,000,000 inheritance.

“First the Butler, then Crumpet.” That’s Snooper’s plan to capture the bad guys, using Aloysius as bait to induce them into chasing him around the mansion. But that booby Blab boobs things. First the ironing board, then the lamp. 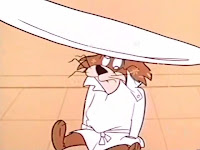 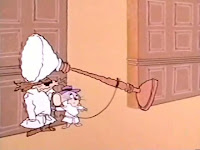 But finally a French door and a shovel manage to stop the crooks. 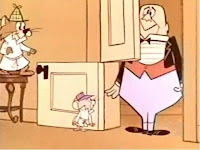 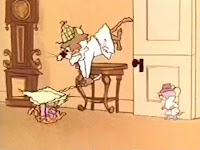 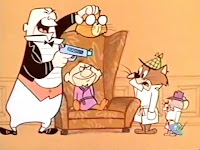 Or does it? Hives disposes of the fake Aloysius with the off-screen police, but it turns out to be the real one instead. Which means the real one had been chasing the fake one, but the fake one knew Snooper’s name when he shouldn’t and the real one didn’t yell out the other was an imposter and .. oh, you’re not supposed to think about stuff like that in a cartoon.

Whether Lew Marshall really did work on this cartoon is open to debate, but I like the end with the little side-step escape move Snooper and Blabber pull before a neat silhouette running sequence, bullets whizzing by, with Bob Gentle painting some faint buildings in the background. If Warner Home Video would get off its and release these cartoons, you could see this far better than on these murky screen captures from a TV recording. 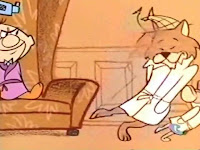 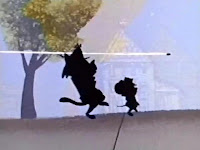 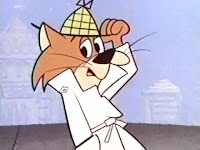 The music selection goes from great to odd in this one. Jack Shaindlin orchestrated a bunch of detective music, for some ‘B’ picture or use by a ‘B’ studio I’m guessing. It works really well. Excitement Under Dialogue is perfect for when the black Chrysler-esque four-door appears on the scene. Even Shaindlin’s circus-like music used during the running sequences somehow fits. But then it’s suddenly cut off and we hear some piece from Phil Green’s Kiddie Comedy Suite. It’s like the sound track can’t make up its mind what mood it wants to set. Jumping back and forth doesn’t work. Later cartoons used more Green than Shaindlin and sound all right, but for this cartoon a score of Shaindlin crime music (and there was lots never heard in cartoons) would have been really effective. The ersatz film noir music enhances the parody aspect.

Just a note about the Green cue names. The ‘GR’ names come from the original EMI Photoplay 45s. Capitol leased the cues for the Hi-Q library and gave them different names and ‘PG’ designations. I don’t have the EMI discs for some of the cues, so I’ve been forced to use the Hi-Q names. My thanks to Earl Kress for identifying Six Day Bike Race, one of a number of Shaindlin cues in this one.