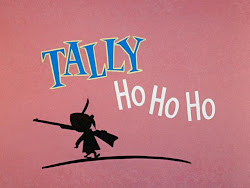 Parents, don’t let your children view this animated bad influence on their tender young lives! No, not because there’s a bear hiding in a closed fridge and your kid may do the same thing. No, not because there’s a hunter shooting a gun at someone and your kid may grow up to join the NRA. It’s because of the shocking, obscene nudity! If you need proof, observe Yogi’s scene where he’s fully naked: 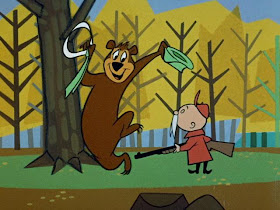 Oh, wait a minute. I grew up watching cartoons like this and I didn’t imitate what I saw. I’m sure the holier-than-thou, would-be censors can say the same thing. But that’s a debate for another day.

Though this was the seventh Yogi cartoon released, it has the feel of the very earliest ones. There’s no Boo Boo, no ranger, no Jellystone Park (there’s not even a mention of Yogi in the title card), but it has lots of off-model, jerk-from-pose-to-pose animation and background blocks of various shades of yellow. So it’s a lot more fun than a few years later, when H-B turned a comic hero into a love-sick sap. On-line sources say Carlo Vinci animated this but it doesn’t have the tell-tale signs I associate with Carlo’s work in the 1958-59 season. 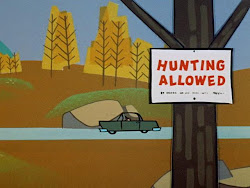 One of Fernando Montealegre’s can’t-see-the-fine-print signs opens the scene and the camera pulls back to reveal a car driving through the autumnal splendour, as we hear the theme to The Donna Reed Show. However, it is not Miss Reed in the car (she would not steal the music for about another year when her TV show first appeared). It is Professor Gizmo from the Ruff and Reddy cartoons, or at least a character with the same design and same Wallace Wimple-ish voice supplied by Don Messick (Wimple was a henpecked husband on Fibber McGee and Molly, played by Bill Thompson, the voice of Droopy). Always ready (or is that “reddy”?) to borrow from themselves, the post-Gizmo guy made an appearance in several Yogi cartoons, including the funnier Be My Guest, Pest. 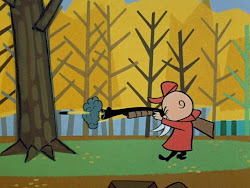 The hunter stops his car, gets out his rifle and trudges past Yogi, who casually remarks “Nice day for huntin’.” When the gun is pointed at him, Yogi attempts to prove he’s not a bear by pointing out his hat and “tie, guy”. Unfortunately, he removes them (see nude picture above), thus proving he is a bear, resulting in cycle animation of the hunter firing his rifle we see throughout the cartoon.

Yogi runs into a nearby lake, where he taunts the hunter by saying “You missed me!” The animation proves otherwise, and we get a great short series of facial expressions from Yogi. 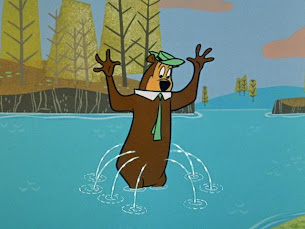 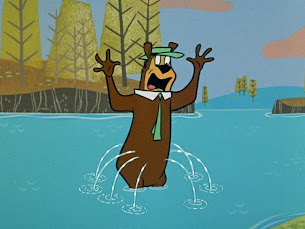 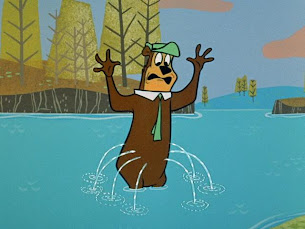 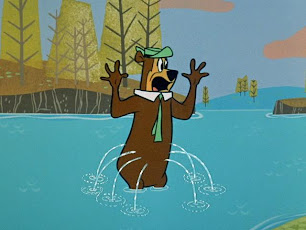 By the way, note how the trees are greener here. And look at the colour choice for the clouds. 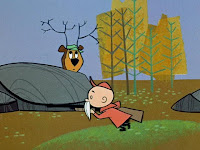 Yogi runs past a deer, which gives him an idea for a disguise.

Ah, but the hunter’s not fooled, and we get more great facial expressions from Yogi before he runs away. 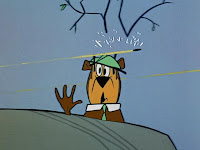 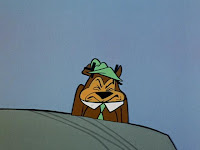 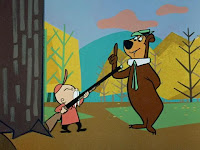 The next scene was done by Mike Lah, as it has the same goofy-faced Yogi with the little eyes, big nose and mouth in mid-face that he drew in other cartoons. The bear plays hide-and-seek with the hunter, but merely puts a cork in his rifle, which predictably backfires. The best part is Yogi’s poses before he runs away. Look at the little tongue in one of them. 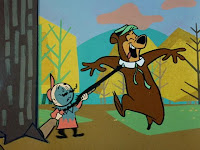 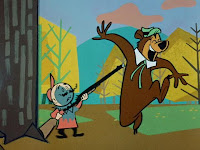 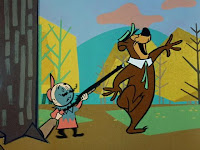 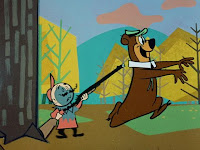 There are no in-betweens. Lah just goes from one pose to another. 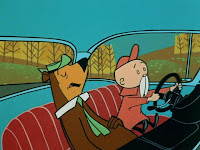 Now’s a turning point in the plot. Yogi quotes from Bugs Bunny that it’s time for some “stragedy” and adds a ‘no’ to a sign which he misreads as ‘Bear Hunting Allowed’ (it just says ‘Hunting Allowed’). And like Bugs, he pretends to be shot (in considerably fewer drawings than Bob McKimson would use in a Bugs death scene) and informs the hunter he’ll be sent to prison for shooting a bear out of season. The hunter decides to take the bear home and nurse him back to health. Look at Yogi’s snout. Carlo Vinci uses odd angles on characters in a bunch of cartoons. 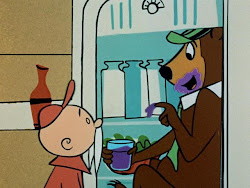 We cut to Yogi in bed, but he’s so discussed by the culinary offerings of the hunter (“You call that grub, bub?”), he investigates the fridge. The hunter finds him there while going to get some jam for him and orders Yogi back to bed.

Ah, but Yogi outsmarts himself by remarking “Feed a fever.” The alarmed hunter calls a doctor and learns the doctor is out bear hunting, then phones the game warden to confirm it really is bear hunting season. Gunshots chase Yogi out of the home as he Ed Norton-like remarks “Shee. What a grouch!” 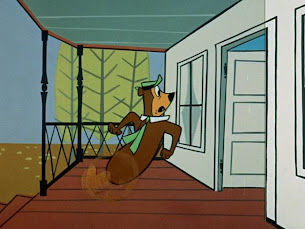 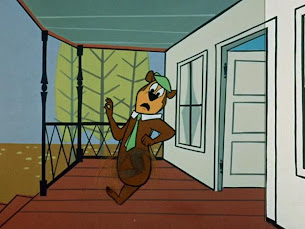 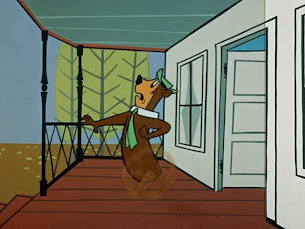 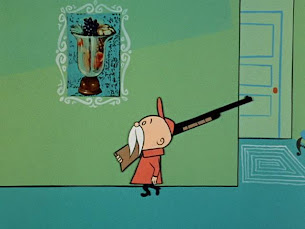 I mentioned how I like the colours in the backgrounds in this cartoon. Another clever use of colour is in the hunter’s home. There’s a diagonal block of a different colour shade on the wall of the hallway and the bedroom.

The background music (including the Donna Reed theme, known as ‘Happy Days’ before Reed’s producers got ahold of it) is all from the Capitol Hi-Q library, save the ubiquitous ‘Toboggan Run’ from Langlois Filmusic.